According to Article 112 of the Indian Constitution, the Union Budget of a year, also referred to as the annual financial statement, is a statement of the estimated receipts and expenditure of the government for that particular year.

According to Constitution of India, there is three-tier system of government, namely. Central (or Union) government.

The basic structure of government budget is almost the same at all levels of government but items of expenditure and sources of revenue differ from budget to budget. Again, there is no clash with regard to sources of revenue because functions of Central, State and local government have been clearly demarcated and laid down in the Indian Constitution. However, we shall discuss here the budget of the Central Government.

Let it be noted that Central Government is constitutionally required to lay an “annual financial statement” before both the houses of Parliament. This statement is conventionally called Government Budget. Accordingly, in India, every year Central (or Union) Budget for the coming financial year is presented by the Union Finance Minister in the Lok Sabha normally on the last working day of the month of February.

The budget is divided into two parts

(i) Revenue Budget and

Arun Jaitley will be presenting the last full year budget of the government before the general elections most likely to be held in May 2019. This is also the first full year budget after the implementation of GST in July 2017 and special attention will be paid to estimates pertaining to indirect taxes.

Given the rising oil prices, the future of how monetary policy is likely to be shaped this year will depend to a great degree on the fiscal deficit target. The market has factored in the possibility that the interest rate cycle has bottomed out in India. The real risk lies in the scenario of the RBI raising rates prematurely if fiscal targets are not met going forward.

The big question the industry is asking is whether this budget will be a populist one. Given the recent neck to neck political battle in Gujarat, a political pundit sitting in New Delhi would most likely be putting his or her money on the above. 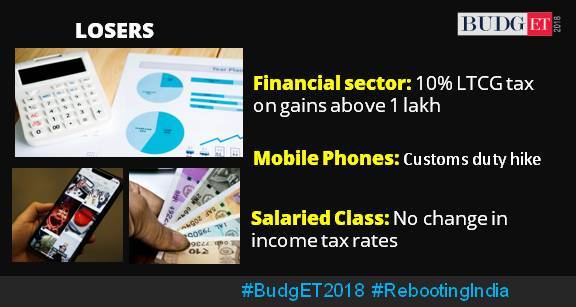 In a major relief to farmers, minimum support price (MSP) for all upcoming Kharif crops has been raised to 1.5 times the cost of production. In case the market prices are lower than MSP, government would procure the produce or ensure farmers get right prices. 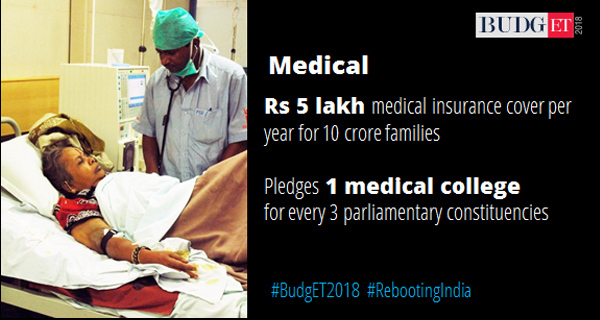 Aayushman Bharat programme: 1.5 lakh centres will be set up to provide health facilities closer to home. Rs 1,200 crore to be allocated for this programme

Rs 600 crore allocated for tuberculosis patients, at the rate Rs 500 per month during the course of their treatment. 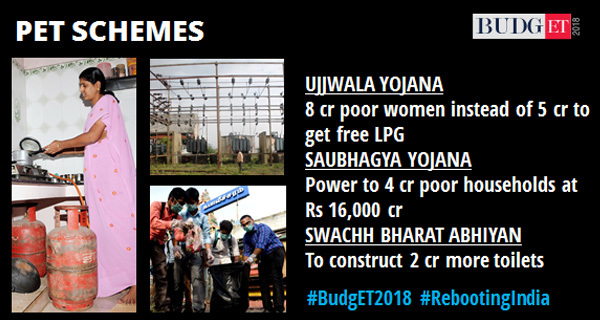 Consumers get relief with excise cut on fuel. Excise on unbranded diesel was cut by Rs 2 to Rs 6.33 per litre and the same deduction was given from unbranded petrol top Rs 4.48 per litre.

Total capital expenditure for Indian Railways set at Rs 1,48,528 crore. A special railway university will also be set up in Vadodara, Gujarat. In order to cut travel times and delays, Jaitley proposed cutting 4,267 unmanned railway crossings. In a bid to overhaul the railway stations’ infrastructure, all station that have a footfall of 25,ooo passengers will now have escalators. To provide connectivity on the go, all trains will soon be equipped with CCTVs and WiFi.

Allocations for Mumbai rail network was pegged at Rs 11,000 crore and for Bengaluru Metro, Rs 17,000 crore was allocated.

Jaitley said that there is a requirement of Rs 50 lakh crore for the infrastructure sector. He said that construction of a new tunnel at Sera Pass will also work in promoting tourism. A total 10 prominent tourist sites will be upgraded as iconic tourist destinations.

In the flagship Bharatmala project that aims to connect India’s eastern and western ends with a 35,000 km highway and roads network, an outlay was announced to the tune of Rs 5.35 lakh crore under phase 1. For toll payments on highways, Jaitley said that the government will introduce a new system called “pay as you use”.

Government pledges contribution of 12 per cent in wages of new employees in all sectors for the upcoming 3 years under EPF scheme. Women contribution to EPF slashed for initial three years to 8 per cent.

Government will bring a new industry-friendly defence production policy 2018 for giving a boost to domestic production for private sector, public sector as well as MSMEs.

Government will now explore the usage of Blockchain technology but it will also take steps to prohibit circulation of cryptocurrencies as they are not classified as legal tenders as of now.

The food subsidy has been increased for the from Rs 1.4 lakh crore in 2017-18 to Rs 1.69 lakh crore in 2018-19. To commemorate the 150th birth anniversary of Mahatma Gandhi, Rs 150 crore have been set aside. Also, it has been proposed that the emoluments of MPs may be increased based on index to inflation.

Government to encourage a strong environment for VCs and angel investors. Meanwhile SEBI would make it mandatory for large corporations to meet a quarter of their debt needs from bond markets.

The disinvestment target for FY2019 has been set for Rs 80,000 crore. The disinvestment targets for the current fiscal have been set at Rs 1 lakh crore. Government would also evolve a scheme that would assign unique IDs for companies. The National Insurance Co, Oriental Insurance Co and United Assurance Co will be merged into one entity which will then be listed. For bank recapitalisation, Jaitley said it many set the path for public banks to lend an extra Rs 5 lakh crore.

Government plans to expand airport capacity by as much as five times and aims to take the trip count to 1 billion per year. An initial investment of Rs 60 has been set aside. Under UDAN scheme, 64 airports will be connected across the country to boost low-cost flying.